( / ) ( / ) ( / ) ( / ) ( / ) ( / ) ( / ) ( / ) ( / ) ( / )
Trending Now
Corn Basis: Wh(e)at's in the Feed Bunk?
DoorDash and Albertsons partner on same-day grocery delivery
Iran’s President-elect Raisi rules out meeting Biden, oil markets look to nuclear...
Zebpay will join organization proposing regulatory framework for crypto in India
Amazon Prime Day is on. These are the deals you can skip
Precious Metals Push Higher on Dollar Weakness and Dovish Central Bank Comments
Malta Chamber of Commerce business unit responds to allegations of lax crypto...
Canadian Dollar Forecast: USD/CAD Surge Pulls Back
If the peer review system is broken, what the hell is the...
Our data shows traders are now net-long AUD/JPY for the first time...
Home ForexForecasts Nearing the Bottom as COVID-19 Cases Soar?

Fundamental Forecast for the US Dollar: Neutral

Get Your Free USD Forecast

US Dollar Out of Vogue

The US Dollar (via the DXY Index) remains on a slow descent lower, weighed down by the recent surge in coronavirus cases that has become the albatross around its neck. As Europe moves closer to re-opening, Australia and New Zealand avoided significant economic damage, and even Canada avoided a significant surge in cases, the juxtaposition in the level of support needed to keep the US economy afloat – the relative easing between the Federal Reserve and other central banks – continues to grow wider.

US Economic Calendar Starting to Rot

The economic calendar over the coming week will provide a conflicted view of the US economy. To a certain extent, much of the optimism garnered over May and June data thus far now appears out of data, insofar as the reporting periods for the June data closed prior to the surge in coronavirus cases in Arizona, California, Florida, and Texas – the latter three constituting the top three states by population as well as three of the top four states by GDP.

The June US consumer price index set to be released on Tuesday, July 14 is likely to show a rebound in price pressures, but this may be in part due to the reporting measurement period. The headline reading is due to rebound to +0.6% from +0.1% y/y, while the core reading is set to steady at +1.1% from +1.2%. Of note, these readings will indicate that real US Treasury yields will stay in negative territory – a positive backdrop for commodities, particularly gold and silver prices.

Elsewhere during the week, the June US retail sales report on Thursday, July 16 may deflate expectations for a V-shaped recovery: due in at +5% from +17.7% m/m, the data does not look all that impressive – especially because it is just beginning to capture the period when Arizona, California, Florida, and Texas have undergone their significant coronavirus surges. 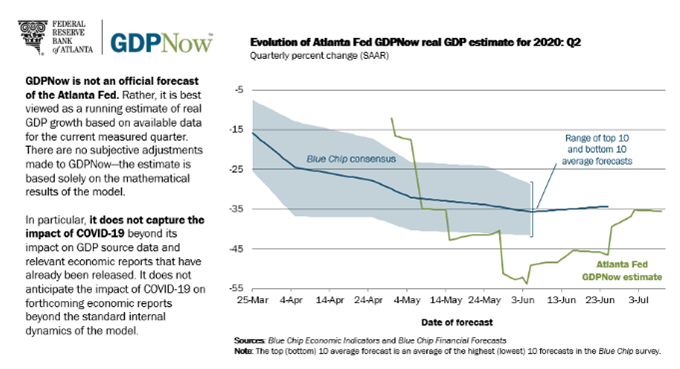 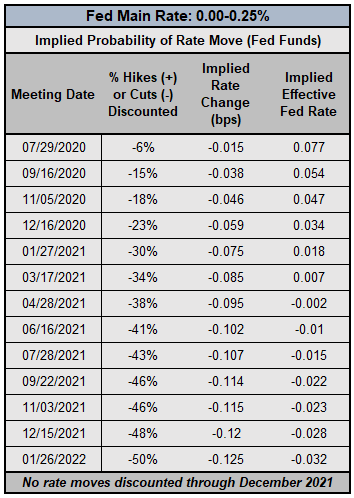 The state of the US economy has given traders little reason to expect the Federal Reserve to withdraw its unprecedented level of monetary support. In fact, looking at the Fed fund rates curve, traders are not only expecting interest rates to stay where they are through December 2021, there is exactly a 50% chance that the Fed will introduce negative interest rates by January 2022.

While a long time into the future, this pricing offers an interesting perspective: it can be resolved in either direction, that interest rate cut expectations can be dragged forward meaningfully still, just as expectations for a normalizing Fed could appear so far into the distant future. Nevertheless, it’s a noteworthy development that these contracts are now being quoted to begin with. 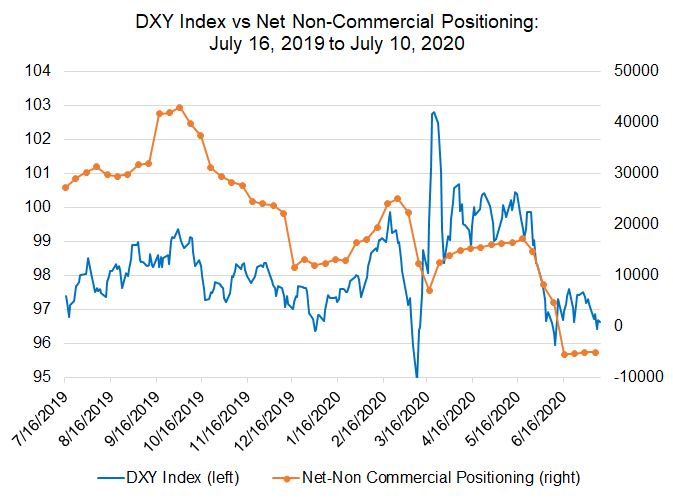 Finally, looking at positioning, according to the CFTC’s COT for the week ended July 7(the most recently available data around the July 4holiday), speculators held steady their net-short US Dollar positions at 4.9K contracts, the same amount held in the week prior. Net-short US Dollar positioning has flat for the past four weeks after the sharp longs liquidation in May.

How Does the Stock Market Work?